Jewish people taken to the streets commemorating #Nakba74 is the most healing thing for the child in Me. Abier@abierkhatib,

We are normal people who want to live in peace, like (most of) you!

These girls from the occupied #Palestine wish you a beautiful day. @WAFANewsEnglish, May 17, 2022

3a. German ‘Christian democrats’ would like to arrest Palestinian organizers even before they go and protest!

Insane. The German Christian democrats in Berlin want to arrest Palestinian organizers BEFORE protests and events for palestine as a “preventive measure” against antisemitism. They also went to BAN all BDS events in Berlin. Let me tell you why this is INSANE
…
Germany categorizes any support for the Palestinian people as antisemitic. Even saying “free palestine” can be grounds for antisemitism accusations. Some Palestinian journalists at Deutsche Welle were called antisemitic for saying #SaveSheikhJarrah then were fired.
…
Arresting anyone who you deem is antisemitic before a demo is fascist behavior. It denies humans their basic right to speech and assembly. CDU reps said this policy can “very likely” happen. Here is the source:
…
tagesspiegel.de
Berliner CDU fordert Unterbindungsgewahrsam für bekannte Antisemiten
Bei ihrer Klausur hat die Berliner CDU-Fraktion einen Zehn-Punkte-Plan für den Kampf gegen Antisemitismus beschlossen. @hebh_jamal, 2022-05-21

Context:
In Germany the slogan "Stop the guns, stop the war, intifada until victory" is deemed to be extremely antisemitic. (die Parole „Stoppt die Waffen, stoppt den Krieg, Intifada bis zum Sieg“).
□ comment: However, the struggle of the Palestinian people against being occupied by this ‘IOF’ military, harrassed by the extremist colonizers ("settlers"), not being robbed of their houses! etc. etc. is not against the Jews as Jews following Judaism, but it is against the state of Israel, which has usurped Judaism for its criminal purposes.

Palestinian activists in Berlin (@PalestinSpricht) told The New Arab they were ‘arrested and beaten’ by German police on Nakba Day. @The_NewArab 2022-05-17

@MajedAbusalama said the disproportionate response was part of a ‘wave of anti-Palestinian repression’ in the country.
english.alaraby.co.uk 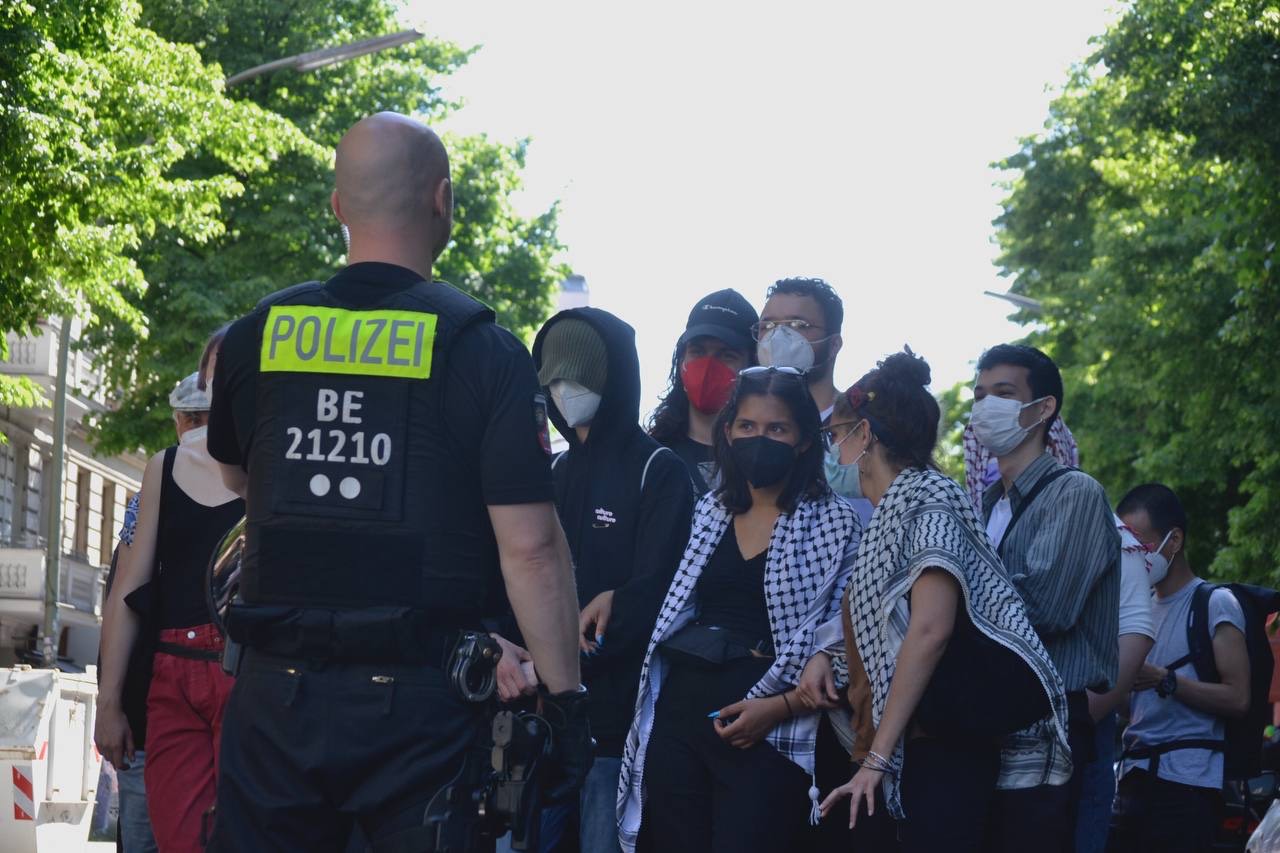 A Berlin police officer approaches Palestinian protester during a Nakba Day flash mob, after banning all commemorations of the day in the city, May 15, 2022. (@thequestionislysh)

Eyewitnesses told +972 that police were targeting Arabs and people of color, even if they were not part of the flash mob. “One guy just had a Palestinian flag on him when the police came out of nowhere and told him he was not allowed to carry it,” said one bystander who preferred to remain anonymous. “The police told us that two people holding flags counts as a demonstration and warrants arrests.”

Another man was arrested for shouting “free Palestine,” while yet another was arrested for wearing a keffiyeh. “Their method seemed to be arresting anyone who might be pro-Palestinian or just looked Arab,” the eyewitness said.

In 2017, 500 neo-Nazis were granted permission to march in commemoration of top Nazi leader Rudolf Hess. At the time, Berlin police stated that they “generally try to balance protestors’ rights to free speech and free assembly.”

4. On Germany’s responsibility for the suffering of the Palestinians

"[Examining] Germany’s responsibility for the suffering of the Palestinians will show clearly that it was post-Nazi FRG that enabled the world to absolve, not only W. Germany but Europe from the Holocaust, by supporting the dispossession of Palestinians" https://palestinechronicle.com/germany-and-palestine-twice-on-the-wrong-side-of-history/…
Paul Dva #SaveSheikhJarrah @zoolooy 2022-05-21
…
BLOOD MONEY : a messy history of German “reparations” for Israel
How shutting up the anti-fascists and war-weary helped weaponize Israel and saved the Nazi arms industry, post-Hitler September 9th is traditionally “OdF–Day” (Opfer des Faschismus/Victims of Fasci…
dogonahighway.wordpress.com

Quote from above:
”The Germans like to regard these armaments for Israel as a kind of “late” justice on their part but fail to see that these weapons were then used with the same justifications as old Adolf, namely to persecute a civilian population resembling the Jews of Europe: unarmed, innocent Palestinians without a political lobby. The fact that the Germans are just as responsible for the Nakba as they are for the Holocaust is something they refuse to recognize to this very day.”