9/11: Were they Victims of ‘Coincidences’ or of Intent?

How Africa Was Erased From the History of the Modern World

= Blessings and peace of Allah on Prophet Muhammad, his Family, and his Companions. =

This is a review of an article revising the general Western point of view of Africa when it is claimed that Africa had at the most a marginal significance for European and American economic development.

However the author shows that Africa eventually even enabled industrialisation itself (mainly through capital accumulation): ”The most important site of erasure (of Africa’s contribution) has been the minds of people in the rich world.” The chapter ’African Gold’ is from another article, worth a separate post.

This article Built on the bodies of slaves: how Africa was erased from the history of the modern world gives the reader new insights and remind us how certain ’racially revisionist storytelling’, i.e. ’whitewashing’ are accepted as facts. Because there is this ”silence and enforced ignorance that surround the central contribution of Africa and Africans to the making of the modern world.”
.What Whitewashing Really Means—And Why It’s a Problem
.Slavery In Islam?

Certainly another aspect of European meddling in Africa, was the greed for gold. Gold was naturally valued in the African kingdoms, f. ex. by the Mali Empire or the Songhai empire, but in their case it did not lead to this scale of oppression (Atlantic slave trade) or destruction (colonialism).

”Things took a turn for the worse in 1471 CE when a Portuguese fleet, sponsored by the Lisbon merchant Fernão Gomes, sailed around the Atlantic coast of Africa and established a trading presence near the gold fields of southern West Africa.”
.The Gold Trade of Ancient & Medieval West Africa
”African gold was indeed so famous worldwide that a Spanish map of 1375 represents the king of Mali holding a gold nugget.”
.The Trans-Saharan Gold Trade (7th–14th Century) 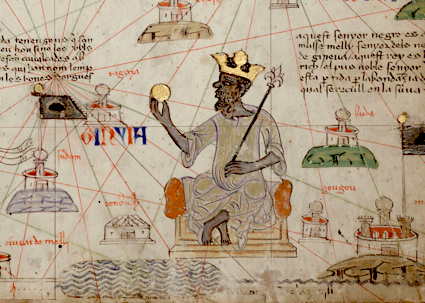 What We Were Told

We have heard of C. Columbus, maybe also Vasco da Gama, the adventurous discoverers of ’new worlds’. And we learned that there was the Atlantic slavery, more or less accepted by the European elites, irrespective of humanistic or religious considerations. Its consequences are with us today.

• From were did Columbus, sailing for the Spanish crown, start his voyage across the Atlantic, and why is this important?

• What is the significance of African workforce for the economic development of Europe?

• Beginning with the late 1600s, what ”was worth more than the metal exports of all of Spanish America?”

• Was the often-professed belief of ”European unique ingenuity and inventiveness” the real reason for Europe’s domination of world trade and of capital accumulation, with the ensuing industrialisation in the 1800s?

On the Real Foundation of the Rise of Europe

”The rise of Europe was not founded on any innate or permanent characteristics that produced superiority.
It was built on Europe’s economic and political relations with [ □ comment: exploitation of ~ ] Africa – to a degree that remains unrecognised (in the public discourse). The heart of the matter here, of course, was the massive, centuries-long transatlantic trade in enslaved people who were put to work growing sugar, tobacco, cotton and other cash crops on the plantations of the New World.”

What Made the Development of the Americas Possible

”Without African peoples trafficked from its shores, the Americas would have counted for little in the ascendance of the West. African labour, in the form of enslaved people, was what made the very development of the Americas possible. Without it, Europe’s colonial projects in the New World are unimaginable.”

As ”Daniel Defoe, the English author of Robinson Crusoe … wrote: ’No African trade, no negroes; → no negroes, no sugars, gingers, indicoes [sic] etc; → no sugar etc, no islands, no continent; → no continent, no trade.’”
Check the original text Built on the bodies of slaves… for a more detailed description.

"Without African peoples trafficked from its shores, the Americas would have counted for little in the ascendance of the west. African labour, in the form of enslaved people, was what made the very development of the Americas possible. Without it, Europe’s colonial projects in the New World are unimaginable."

"Through the development of plantation agriculture and a succession of history-altering commercial crops – tobacco, coffee, cacao, indigo, rice and, above all, sugar – Europe’s deep and often brutal ties with Africa drove the birth of a truly global capitalist economy. Slave-grown sugar hastened the coming together of the processes we call industrialisation. It radically transformed diets, making possible much higher worker productivity. And in doing so, sugar revolutionised European society."

And cotton… /more:
.Built on the bodies of slaves: how Africa was erased from the history of the modern world

Some statistics on the human resource extraction from Africa in the 17- 19th century, i.e. Atlantic slave trade

”The impact of this warfare on Africa’s subsequent development, however, has been immeasurable. Nowadays, the consensus estimate on
→ the numbers of Africans brought to the Americas hovers about 12.6 million…
→ if ≈ 10.7 million survived the dreaded Middle Passage, 1.8 mio did not!
→ how many of these 10.7 million Africans were shipped directly to North America? Only about 388,000 = 3%!
→ another 6 million Africans were killed during the hunt for slaves
→ between 5% and 40% perished during brutal overland treks to the coast, or while being held, often for months, in barracoons, or holding pens, as they awaited embarkation on slave ships…
→ another 10% of those who were taken aboard died at sea during an Atlantic transit…” (≈ 1.1 to 1.8 million) 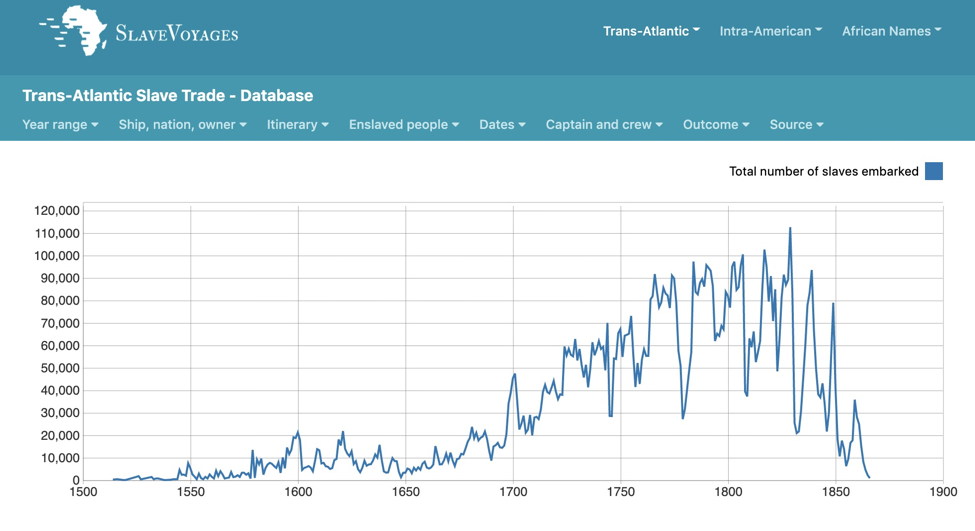 ”When one considers that Africa’s total population in the mid-19th century was probably about 100 million, one begins to gauge the enormity of the demographic assault that the slave trade represented.”
Related
.How Many Slaves Landed in the U.S.?

Erasure in the Minds of People in the West

”The most important site of erasure, by far, has been the minds of people in the rich world.”
…
”It requires that we transform how we understand the history of the last six centuries and, specifically, of Africa’s central role in making possible nearly everything that is today familiar to us.”

”Nearly a century ago, WEB Du Bois had already affirmed much of what we needed to know on this topic. ’It was black labour that established the modern world commerce, which began first as a commerce in the bodies of the slaves themselves,’ he wrote. Now is the time to finally acknowledge this.”
.Built on the bodies of slaves: how Africa was erased from the history of the modern world

Another interesting chapter of course is the resource extraction from Africa after the colonial period still going on today.

Africa: Rising for the Few

Africa was cheated out of US$11 billion in 2010 through just one of the tricks used by multinational companies to reduce tax bills, according to new Oxfam report, ‘Africa: Rising for the few,’ released today. This is equivalent to six times the amount needed to plug the healthcare funding gap in Ebola affected countries of Sierra Leone, Liberia, Guinea and Guinea Bissau.
Multinational companies cheat Africa out of billions of dollars | Oxfam International

Fairtrade is a global movement which addressees the injustices of conventional trade by supporting smallholder farmers and workers to secure better terms of trade, with specific focus on rural development.
.About Fairtrade – Fairtrade Africa