Proof: On 9/11 WTC 7 Collapsed Because of Controlled Demolition

= Blessings and peace of Allah on Prophet Muhammad, his Family, and his Companions. =

+ including evidence on the North & South Towers collapse +

Science starts with observation. Trust your eyes means to look at what you see, don’t swallow what you have been fed with over and over ad nauseam!

Spoiler: the official story of 9/11 is fake, but don’t worry – false stories have been traded before!

Not everything which we are told by the authorities is true and not everything is a lie. But it happens that the authorities or the people who are supposed to protect us and serve us, spread lies, either intentionally or maybe because they cannot differentiate between what is true and what is false. Either case, it’s bad, but their lying always has political, financial, etc. reasons, there is a distinct motive.

It is the task for truth and justice activists to find the reality behind the smokescreen and act accordingly in an ethical way.

Among all the inconsistencies, irregularities, strange coincidences of the attacks on the World Trade Center buildings on September 11, 2001, there is ONE incident, ’the smoking gun of 9/11’, and this is the strange collapse of the WTC7 building, a 47-story office building.

It fell down at about 5 pm on that day, without even being hit by a bird, let alone by an aeroplane in no more than 7 seconds, imagine 47 stories in 7 seconds!

It had office fires for some hours, which started to burn out, then in the afternoon of this fateful day, the building collapsed so fast, it would appear like a house on cards.

Demolition experts directly identified this collapse as ‘controlled demolition’, which is caused by explosives.

This theory was denied by the responsible state authority (NIST), but it was confirmed by a four-year-long research project from the University of Alaska Fairbanks, which came to the conclusion that WTC7 cannot have collapsed because of office fires.

Researchers in the university’s Department of Civil and Environmental Engineering at the University of Alaska Fairbanks (UAF) conducted a ”four-year computer modeling study of WTC 7’s collapse”. Their ”report concludes that the collapse of WTC 7 on 9/11 was caused not by fire but rather by the near-simultaneous failure of every column in the building.”

The main towers also did not collapse because aeroplanes struck them or because of office fires (even if they were hit by planes).

Here is how David Chandler, prof. in physics evaluates the evidence :

This terror event is unique in respect of the number of videos, photos, and also eyewitness accounts which enables the public to view it later when the first shock has subsided.

– More on the Destruction of the Towers: Evidence Overview | AE911Truth

4. Science Looks at the WTC7 Collapse 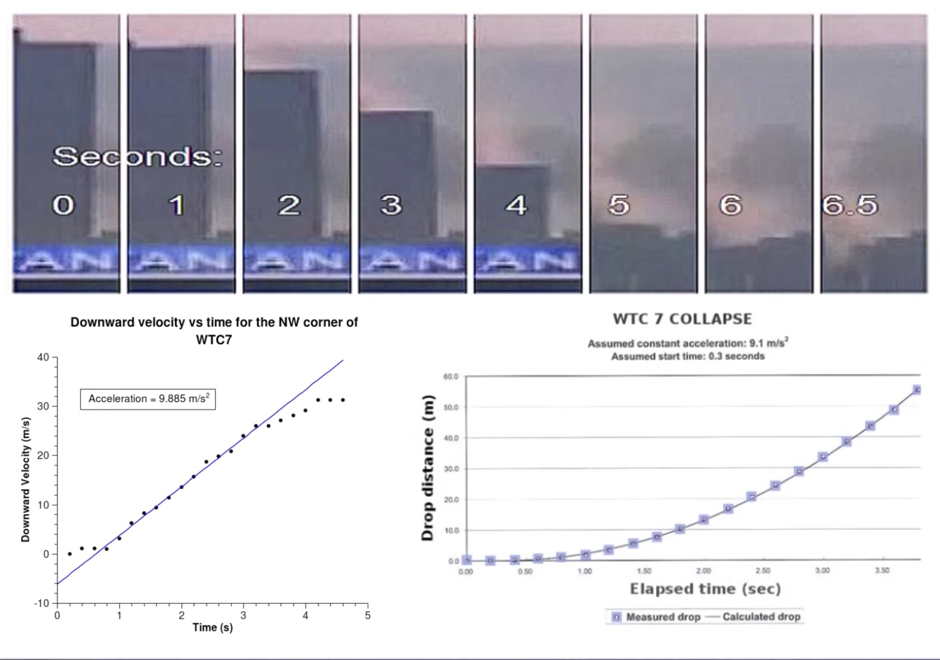 Another clue is the speed with which those buildings fell into their own footprint. The first 8 (?) stories fell at the speed of free fall (…seconds). They can only do this if there is no resistance in their downward way. There is more to it…

5. Some Videos for Illustration

Former Gov. Jesse Ventura gets into a heated argument with Piers Morgan (BBC) about 9/11 and the government’s response.
”How did they know it so quickly, like they knew it about Lee Harvey Oswald?”
.Ventura’s take on 9/11: ‘They wanted it to happen’ – YouTube