The Messenger of Allah, peace and blessings be upon him, said,
“The parable of the believers (al-muminūn ) in their affection, mercy, and compassion for each other is that of a body. When any limb aches, the whole body reacts with sleeplessness and fever.”
Narrated by Al-Nu’man ibn Bashir; Source: Ṣaḥīḥ al-Bukhārī 6011, Ṣaḥīḥ Muslim 2586

– Hadith on Brotherhood: Believers are one body in compassion

What will stop the Hindutva goons?

When they are instigated by the Indian government, by Mody and Amit Somename.

This is what a high-ranking officer of the Indian Navy had to say of the hateful situation in India in December 2021:

”We will tear them apart,” continued Pandey. “Don’t think that Muslims are growing in numbers. If we wake up today, and make a resolution, … If we want to decrease the population of Muslims, then we are ready to kill…. If we become soldiers and kill two million Muslims, then we’ll be victorious.”

This is not one incident on one day, this has been spewed out by a number of ’gurus’ or ’seers’ (sic!) in a conference at Haridwar in Uttarakhand by many of the most important Hindutva leaders [criminals].

It will be easy for BJP supporters to dismiss this as a gathering of ‘fringe elements’. However, the fact is that a member of the BJP was at the event, while many of those in attendance have deep ideological links to India’s ruling party. As one Muslim lawmaker put it, the event was an “incitement to genocide”.

3. What have people learnt from Nazi Germany?

Indian Hindutva hate sect have embraced almost every policy which Nazi enforced against the German Jews and transposed it to aim on the Muslims.

Quote from the article above:

”The RSS’s first Supreme Commander, Hedgewar, set forward a doctrine that mirrored the Aryanism of Nazi Germany.
India, insisted Hedgewar, should properly be called “Hindustan” [land of the Hindus] and protected as a “nation of Hindu people” which he compared directly — and contemporarily with the rise of Nazism — to a ’Germany of Germans.’”
+
”Ever since the Partition of India in 1947, the RSS has made one of its primary goals the ’re-establishment’ of a mythical ’Akhand Bharat’ [“United India”], which ostensibly stretched (at least) from Afghanistan to Myanmar, if not further. Invoking the concept of “Akhand Bharat” at the Haridwar conclave, yet another Hindutva activist warned that India — despite its nearly 80 per cent population of Hindus — ’is becoming Islamic.’ He argued, ’Let us go back a little. Half of the nation is already Islamic, where green flags [of Islam] are already being hoisted in Afghanistan, Bangladesh, and Pakistan.’”

Also
“They thought they were going to ride the tiger, easily tame it and get down. But you can’t easily tame a tiger.” Nilanjan Mukhopadhyay, a biographer of Mr. Modi said.
– As Hindu Extremists Call for Killing of Muslims, India’s Leaders Keep Silent – Hindutva Watch by Sameer Yasir

□ comment: If no miracle happens, we’ll see a new genocide unfolding. +
During the event in Raipur, Kalicharan had said, “The target of Islam is to capture nation through politics. In front of our eyes they had captured in 1947 (referring to partition)…They had earlier captured Iran, Iraq and Afghanistan. They captured Bangladesh and Pakistan through politics…I salute Nathuram Godse that he killed Gandhi.”
– FIR Against Hindu Religious Leader for Derogatory Remarks Against Mahatma Gandhi | The Wire

The mask is falling off,
Those criminals show their true selves!

Despite everything, Allah protects the faithful.
Evil has to be stopped, those who sow sedition have to be locked up!

{O you who believe! remember Allah’s favour on you when a people had determined (made a plan) to stretch forth their hands (in aggression) against you, but He withheld their hands from you, and be careful of (your duty to) Allah, and on Allah let the believers put their trust.} 5-11

This verse [may refer to specific incidents in the prophetic era of Islam according to several interpretations, and in a more general sense it] is meant to remind the Muslims of Allah’s protection of them and their fledgling [and at times threatened] community against the powerful forces against them, since it is addressed to the faithful as a whole, and the pronoun “you” is plural throughout the verse, indicating that it refers to Allah’s continued protection of the Muslims as a community. TSQ281

6. Christians are also threatened & Dalits & others

Here the good-for-nothings (who have nothing better to do) burn up the effigy of Santa Claus.
What will be next to be burnt by them is the question.

.What will they burn, when there are no Santa Clauses left?

7. Invent scare, blow up fear, have an excuse

This is the strategy of the Islam haters, those good for nothings, following the ‘great exchange myth’ and it’s a lie of course. It has been spread in North America, Europe, India:
To see Muslims as foreigners or intruders. Muslims, however, have every right to live in any country of their choice, not less if they have been born in the country.

And make them forget about the real problems of India!
– Crippling infrastructure
– Insufficient and unequal healthcare sector
– Great inequality in Indian society
– Unemployment
…

Assam
When your Muslim community is blamed for being “illegal encroachers,” never mind you lived there for 50 years! (See the parallels of house evictions in East- Jerusalem and elsewhere in occupied Palestine, Hindutva is an eager ally of the Zionists of the Israel apartheid regime).

Maynal Haque was holding a bamboo stick in his hand when the police shot him at point-blank range. All around him, the houses of the village he grew up in were being destroyed or set alight by police. As Haque fell to the ground, officers’ batons pounded on his body and a photographer, appointed by police to document the raid, ran over and began stamping hard on him, a scene caught in video footage. Once dead, Haque was rolled into a bulldozer and carried off by officers.

– ‘Do we not have any rights?’ Indian Muslims’ fear after Assam evictions | India | The Guardian

Hatred and Killings
The hate and killings in India, mostly – but not exclusively – against Muslims have reached a tipping point. The Indian government does not openly engage in this crime but does so surreptitiously and by staying totally quiet in face of public calls for murder.

Much can be lost for international (and local) investors. Modi, where are you? Modi, are you fine with what is happening in the country? (It seems so. And you are, but this wild beast will kill even your relatives).

May Allah prevent this strife and fitna ! May Allah protect all different groups, Muslims, Christians, Dalits, Naxalites, peasants and farmers against international agro-corporations and the poor and downtrodden! 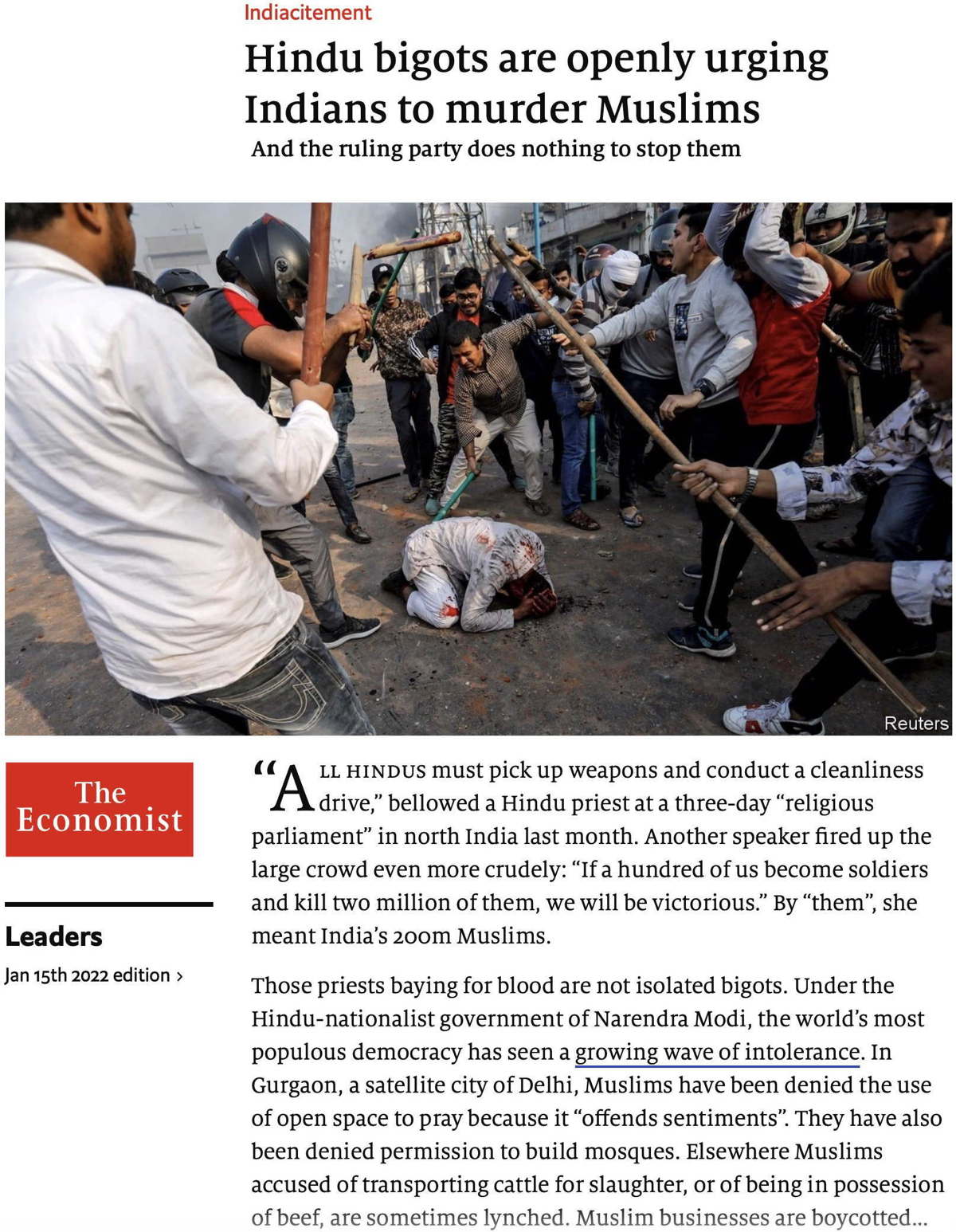 When the tv-anchor asks: ”is it religion to call for murder of 20 lakh people?” Sadhvi Annapurna said, "yes, it’s our duty, and ends by saying, "WE WILL K!LL whoever is against our religion". This is happening on live TV and no law agency cares.
And
Swami Anand Swaroop says he stands by his speech at the #HaridwarHateAssembly. Imagine the impunity that they are continuously repeating their calls of violence.
And
nor will he be arrested! This is the reality of this so called secular and democratic country. 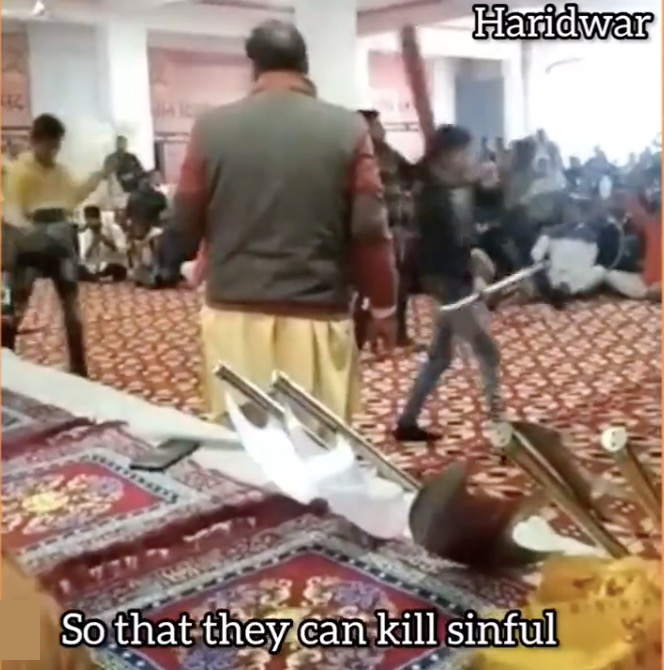 Is this the New India you wanted for your children? In the same "Dharm Sansad" children are swinging axes and the speaker is motivating them by saying that these axes are for cutting the necks of "vidharmis".

This is what we – in this world – got from the ’War on Terror’, which is a war of terror.